What fintechs would Santa use? 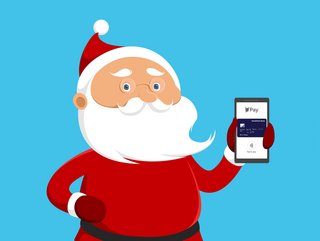 In the spirit of the season, we've been pondering what fintechs Santa, the man himself, and his elves would be likely to use this Christmas

It’s that time of year again – a time of peace and joy, of overindulgence and regret, a time when content editors everywhere roll out their most frivolous articles of the year. We’re no different.

In the spirit of the festive season, we wanted to imagine a world where Santa was embracing digital transformation. What fintechs would Santa use to make his Christmas Eve a little easier? Here is what we think – from payroll to fleet management, plus a few things in between. Let us know what we’ve forgotten by sharing on social media, and have yourself a wonderful Christmastime.

1. A fuel card for the sleigh

In just one night, Santa and his trusty reindeer will cover more than 40mn miles, delivering presents for the world’s boys and girls – well, the ones that have been nice. With an average distance of 200 metres between neighbouring households, his cavalcade of nine little helpers will need to travel at 5-6 million miles per hour to get the job done in time for Christmas morning! That’s some workload for just 36 little legs.

But on the ground at least, wild reindeer only tend to travel between 30 and 40 miles per day, meaning that Rudolph and his crew will need some assistance. As far as we know, Santa hasn’t gone electric just yet (range anxiety would be terrible if you were crossing the Pacific Ocean) so Santa will need some sort of fuel card to top up his sleigh at regular intervals. Assuming Santa’s sleigh has a similar fuel economy as a Nissan Qashqai (and why wouldn’t we?), then he’ll need to make over 74,000 stops during the night.

With such huge distances to cover, it’s imperative for Mr. Claus to have the right fleet management software in place. As we all know, Santa keeps all of his sleighs at the North Pole, meticulously tended to by a team of loyal elves. So if something goes wrong mid-flight, he can hardly nip back for some impromptu maintenance.

Fleet management platforms will be able to calculate the most efficient route for Santa and his reindeer to take – and when you’ve got a billion presents to deliver, every second counts! Most fleet management software will also be able to deliver useful analytics, identifying areas for fuel efficiency improvements and spotting potential problems before they arise.

Related reading: Discover how telematics are helping to improve insurance

3. Payroll solution for the elves

There are nearly 2.4bn children in the world, according to Unicef. If we say that exactly half of these children have been nice, not naughty, then Santa’s workshop will need to work overtime throughout the year to get every gift ready in time for Christmas. In fact – if we assume that the elves enjoy 40-hour weeks, get European-style holiday allowance, and are capable of handcrafting two toys every hour – Santa would need to employ in the region of 35,000 elves just to get every toy made in time. That puts North Pole Inc. on a par with the likes of Colgate, Westpac Banking and car maker Kia.

Once you factor in all the support staff needed for such a large workforce – cleaners, caterers, HR, IT, assembly line engineers and sleigh mechanics – it becomes obvious that Santa will need a pretty comprehensive payroll solution. For argument’s sake, let’s say the North Pole falls under the jurisdiction of Norwegian employment law, where minimum wage tends to start at the equivalent of €16.50 per hour. Santa’s annual wage bill for his elves alone would be over €1.06bn.

Related reading: Fintechs could allow elves to take an advance on their salary

So now we know that Santa’s 35,000 elves make 1.2bn toys every year – more than five times as many as Lego! That’s quite some operation. But the North Pole is a barren landscape with few resources for things like timber or metal screws. So it stands to reason that Santa’s workshop must import almost all of the materials used to make their toys.

That raises the prospect of an almighty supply-chain headache – and we’re not just talking about the logistical challenge of getting bulk shipments to the North Pole. Multiple suppliers means multiple ERP systems, multiple deduction codes and differing terminologies. Let’s take an example. Santa pays his supplier for a shipment of a million bicycle handlebars, but some are missing on arrival or defective. Both Santa and his supplier have the correct deduction in their ERP system, but it might be called different things or have different deduction codes. Santa needs a robust and reliable solution that can help him, and his suppliers, to reconcile accounts receivable (AR) and accounts payable (AP).

The final thing Santa would need is insurance – and lots of it! In fact, the man himself has such many and complex requirements that we think he’d be better off going with an insurance broker. Indeed, many insurers would baulk at the thought of an old, unfit man jumping down chimneys in the dark.

But it’s not just personal injury that Santa would need to be insured for. He would need auto insurance for his sleigh, health insurance for his elves, animal insurance for his reindeer, buildings insurance for his toy factory, and perhaps even professional liability insurance. After all, he’s likely to knock a few things over when he’s fumbling about in people’s homes. Thankfully for a man with such extensive insurance requirements, the evolution of the insurtech space has made it easier and more convenient than ever for him to find insurance – or, like we suggested earlier, he could go with an insurance broker.