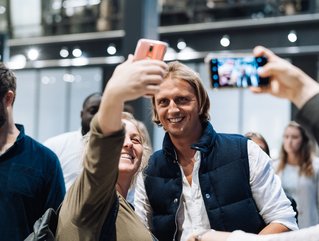 As a teenager, Nikolay Storonsky was a champion swimmer and brilliant student. A keen kitesurfer, he currently heads up the UK’s most valuable fintech

As the brilliance and drive behind one of the world’s most successful fintechs, Nikolay Storonsky has a story almost as colourful as his meteoric rise within the financial industry.

Born in Dolgoprudny – a town located about 20 kilometres north of Moscow’s city centre – in 1984, Storonsky grew up in a Russia that was newly divorced from the Cold War and Communism and embracing Western-style democracy and a free market economy.

His father, Nikolay Mironovich Storonsky, was a senior manager for Gazprom, the Russian majority state-owned multinational energy corporation that is headquartered in the Lakhta Center in Saint Petersburg. Still working, he is currently the Deputy General Director of Science for Natural Gas Research Institute since 2017, as well as the First Deputy General Director for Science Gazprom Promgaz OAO.

Coming from such a science-oriented background, it's hardly surprising that young Nikolay excelled academically, studying for a Master’s degree in physics at Moscow University, and also taking a second Masters' degree in economics at the New Economic School in Moscow.

But, as well as being a brilliant student, Storonsky was a keen athlete. During his teenage years, he became a state champion swimmer, and also took boxing lessons.

In 2004, aged 20 and in search of new challenges and work experience in a financial industry hub, Storonsky moved to London. His bold approach and impressive academic background served him well, and within weeks, he started his first job in finance as a trader – first for Lehman Brothers and then later, after the 2007 economic crash and fall of the investment giant, with Credit Suisse.

The hours were long and brutal, but for highly ambitious Storonsky, they left a lasting impression and shaped his work ethic. And in 2015, he left Credit Suisse to launch Revolut – which, at the time, echoed the new digital neobank startups emerging within Asia.

Storonsky has always been vocal when it comes to criticism of the incumbent banking system. He was once quoted as saying: "I just don't like banks. They're so bureaucratic, with so many managers not really doing anything ... If you fired 80% of bankers, nothing would change.”

A tough work ethic within Revolut

And forcing change is exactly what drives him. His determination to succeed was evident from the hours he put into the venture on a daily basis, often spending 18 hours a day at the startup’s coalface. He expected the same level of commitment from his team, which ultimately led to conflict and complaints about the work culture in the early days of Revolut.

He was once quoted as saying: “I can’t see how work-life balance will help you build a start-up. Either you’re all in, you’re focused and you spend time on it, or you have little chance to survive.”

Wired Magazine even published an internal email from Storonsky warning that those who underperformed would be “fired without any negotiations”, cementing a somewhat tyrannical reputation.

Addressing a positive culture within Revolut

As a result of the damning report, Storonsky worked hard to reverse the reputation held by Revolut in the marketplace. While he has in the past argued that running a startup is not for the fainthearted, his zeal has matured and the company recently introduced an equity participation plan for its now 2,200 employees, who have seen their stakes skyrocket following the most recent valuation.

In 2021, a Series E funding round led by Japan’s SoftBank and Tiger Global Management raised $800mn and saw the then-six-year-old fintech hit a jackpot valuation of $33bn.

Today, Storonsky is seen as a mentor and advocate for fintech, which means he’s now a regular speaker for the cause. He is in demand as a presenter because of his dynamic delivery style and acute industry knowledge in finance. To date, he has taken part in well over 100 business events globally.

A thrill-seeker in his spare time

But his tempered management style has not extended to his love of adrenaline and sports, and Storonsky is an avid kite surfer who enjoys the rush of extreme activities whenever he can. He is also a family man at heart, settling into London life with his wife and two daughters.

Revolut continues to move from strength to strength under his leadership. Despite a disappointing period in 2021 – when the neobank withdrew from Canada following difficulties during its application for a banking licence – today, Revolut is one of the world’s most successful digital banks.

With a recent valuation of US$33bn and a new partnership with fellow stratospheric fintech stripe, the future has never looked brighter for this sporty and determined CEO.