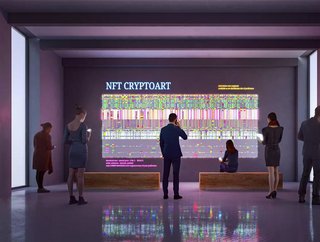 The Bank of England said the US$2.3trn of market assets could pose a risk to the global financial system

The Bank of England has issued a statement saying cryptocurrency assets could post a systematic risk to the global financial system.

The warning comes after explosive growth in crypto assets, from $16bn in 2017 to $2.3trn in 2021. According to a report by Coinbase, the leading US cryptocurrency exchange platform, the global financial system is sized at $250trn - with crypto assets making up less than 1% of the world economy.

However, experts have suggested that the speed at which crypto is growing, and the knock-on effect of a price collapse, could result in serious economic damage.

Jon Cunliffe, deputy governor of financial stability at the Bank of England, compared the destabilizing power of cryptocurrency to the subprime collapse of 2008, saying, ”In that case, the knock-on effects of a price collapse in a relatively small market was amplified and reverberated through an un-resilient financial system causing huge and persistent economic damage.”

He argued that because the crypto industry is growing rapidly and beginning to connect to the traditional financial system, with the emergence of leveraged players and in a mostly unregulated space, systemic risks, while limited now, could grow very quickly.

Reports show that mainly unregulated crypto assets have grown by 200% in 2021, from just under $800bn to $2.3trn. Data shows that 95% of them, including bitcoin, are unbacked by any asset or fiat currency.

Cunliffe has also suggested that regulation should be pursued as a matter of urgency.

Cunliffe’s concerns were echoed by Susannah Streeter, senior investment and markets analyst, Hargreaves Lansdown, who believes a crash in crypto could have devastating consequences.

She explained, ‘’Regulators have been tip-toeing around the crypto world, shouting out occasional warnings to the crowds of speculators, but we now have the firmest indication yet that they will soon be stepping in to break up the block party.

“The Deputy Governor of the Bank of England Sir Jon Cunliffe clearly believes the speculation has reached such a level that a crypto time-bomb is now ticking, which could blow up in the face of the financial sector.”

Streeter said that with unregulated crypto assets skyrocketing in value, banks and hedge funds are now becoming involved, and the Bank of England is worried about contagion if the value of coins and tokens held deflates rapidly.

The statement from the Bank of England comes hot on the heels of a call to action from the chair of the Financial Conduct Authority, Charles Randell in September.

The FCA is concerned about the collision between social media and the crypto world, with Kim Kardashian’s single post about a token earlier this year considered to be the biggest financial promotion in history.

Now, anxiety about the way in which financially vulnerable young investors are being targeted by influencers has turned to speculation that a "crypto wild west" could destabilise the financial system. "There has been a hesitancy until now to bring cryptocurrencies into the regulatory sphere because of the risk it will add more legitimacy to the currencies," explained Streeter.

The FCA’s board was recently asked about its approach to regulating cryptocurrencies by members of the public during the City watchdog's annual meeting. FCA markets director Sarah Pritchard responded by saying, "The FCA has a really limited remit in terms of crypto-assets and crypto assets-related activities. They largely sit outside our regulatory framework.

She went on to say that one of the regulator's main concerns when it comes to crypto assets is people's understanding of the risks associated with investing in them. “We know that people are increasingly owning crypto assets – approximately 2.3mn of us hold cryptocurrencies and crypto-assets and, worryingly, our data shows that around 14% are using credit to do so, which increases people's exposure to loss.”

Streeter said central banks and regulators see part of the solution lies in pushing this intense interest away from thousands of coins and tokens in the crypto space, towards stablecoins. These are pegged to fiat currencies like the dollar, but they currently only make up around 5% of crypto assets held. "The Bank of International Settlements, a global forum for central banks, has already set out how clearing and payments services should be applied to stable coins.”

She also pointed out that there appears to be increasing backing of recommendations made by the influential Basel Committee on Banking Supervision.

“If banks and other regulated financial institutions dabble in crypto, the committee is considering making them put aside enough capital to cover 100% of potential losses. Giving speculative tokens a high-risk price tag is likely to make cryptocurrency dealing and investment very expensive and could limit the number of new institutional entrants into the crypto world.”

Earlier this month, regulators put forward plans that the safeguards applied to systemic clearing houses and payment systems would also be applied to stablecoins (cryptocurrency backed by an asset or fiat currency) However, stablecoins only make up 5% of crypto assets.

Cunliffe also said it took two years to draft the measure, during which time stablecoins have grown 16-fold.

Streeter added, “If the environment is made too cumbersome there is a risk that innovation in the fast-moving world of decentralised finance could be quashed, slowing down the efficiency of operations and leaving the UK behind countries that are welcoming crypto with open arms.’’