Blockchain: optimising payments or disrupting them? 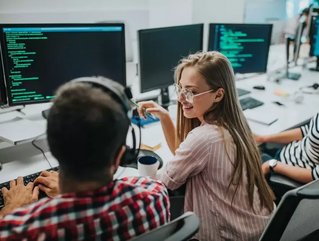 We explore whether blockchain should be a tool to reform the payment solutions status quo or if it signifies something more revolutionary...

A foundational technology in the last 10 years of development within financial services (FS), blockchain is essentially an integrated network of individual, immutable records of information called ‘blocks’. The ‘chain’ refers to a publicly accessible network through which the data contained in the blocks can be utilised. Fundamentally, blockchain records basic transaction details such as currency and the amount exchanged, the date and time of transaction, and who participated in an exchange. Furthermore, each block receives a unique identifier code, meaning that, although transaction details may appear similar in some instances (repeat orders throughout a month or similar orders placed in quick succession), each will still exist as an independent and easy-to-identify record.

The blockchain ‘journey’ or ‘process’ can be summed up as follows:

As a highly secure, transparent and decentralised public ledger, blockchain has the capability of producing truly disruptive results in the payment solutions arena. In fact, some of the biggest challenges facing this aspect of FS, such as data integrity, fraud and tech integration, can be significantly addressed by blockchain. However, PwC’s ‘Financial Services Technology 2020 and Beyond’ report found that 57% of those it surveyed were unsure or unwilling to make use of it, despite an almost equivalent amount (56%) stating that they recognised its significance. The dissonance of these conflicting viewpoints appears to indicate that, although its value is clear, the majority of companies cannot find a practical use for blockchain.

Whether this stems from perceptions of it being an ‘untested’ quantity or simply owing to widespread legacy IT systems which cannot integrate with it, PwC appears certain that those who do not explore utilising blockchain will reap negative outcomes, particularly in terms of higher operational costs: “Blockchain systems could be far cheaper than existing platforms because they remove an entire layer of overhead dedicated to confirming authenticity. In a distributed ledger system, confirmation is effectively performed by everyone on the network, simultaneously. In FS, that includes those who move money, adjudicate contracts, tax transactions, store information and so on.”

This view is partially corroborated by McKinsey’s analysis, which found that 70% of blockchain’s short-term value could be derived from “cost reduction, followed by revenue generation and capital relief”, although it clarified that this aspect is less significant for FS than other industries. Therefore, it can be inferred that blockchain, applied exclusively within a short-term strategy, is not necessarily a value-adding approach. Indeed, this may account for the FS industry’s apparent reluctance in PwC’s report. It could subsequently be inferred that the true value of blockchain lies not in this limited capacity but rather in its potential for disruption; as an instrument of future innovation and a company’s long-term vision. The World Economic Forum considers that the answer could lie in between: “Blockchain will fundamentally alter the way financial institutions do business around the world. However, the effects will be hidden, coming from new processes and architecture based on blockchain rather than radical fintech innovation or new currencies such as Bitcoin.”

For Ethan Beard, Senior Vice President of Xpring at Ripple, the most exciting aspect of blockchain is its ability to transform and even create entirely new economic models. “The application of blockchain technology in payments, for example, has allowed businesses to facilitate faster transactions while fostering instant trust between parties,” he explains. “Xpring, for example, is helping gaming companies like Forte provide more payment options for gamers. Gaming is made up almost entirely of digital micro-transactions where users purchase in-game items such as skins, power-ups or specific items. By integrating crypto into its platform, Fortnite users can easily purchase in-game currency in small amounts instead of having to purchase large amounts at one time. Blockchain can also allow users to buy and sell digital goods, creating a new in-game economy and business model for game developers.”

Arguably no discussion on blockchain within the payments sector can be complete without considering Bitcoin. Among the most disruptive use cases of blockchain in the last 10 years, Bitcoin is a cryptocurrency built on the same basic principle: data regarding each bitcoin is immutable (there are 21 million in total) but the information can be freely recorded and transacted, i.e. the transferral of ownership when buyers exchange bitcoins for goods and services. Entirely peer-to-peer (P2P) and with no intermediaries or third-party participants, Bitcoin represents a secure, transparent and decentralised alternative to the fiat currencies currently circulated worldwide. Essentially, blockchain enables Bitcoin and other similar cryptocurrencies to practically eliminate processing or transaction fees while also mitigating dependency on banks and governments to guarantee their value.

FinTech startup Ripple was founded in 2012 with a view to overhauling global payment infrastructure. Comparing the legacy global transaction framework to an “outdated postal system” as opposed to a 21st century, digitally-driven system, the company uses blockchain in conjunction with digital assets to create a network capable of enabling FS providers to carry out international payments quickly, reliably and cheaply. With a payment network encompassing 300 customers spread across 40 countries globally, Ripple is one of the leading examples of blockchain being successfully deployed for commercial use. However, despite its transformational service capabilities, the company does not seek to undermine the role of centralised institutions. Instead, Ripple uses its technology to innovate from within and provides tech alternatives in a bid to encourage improved services. Furthermore, it is willing to seek out partnerships with other FinTechs in order to help shape the new industry it wishes to see, such as its 2019 collaboration with Finastra.

Taking the concept of Bitcoin and democratising the back end technology underpinning it, Ethereum is an open source platform for creating cryptocurrencies and controlling digital value on a global scale. Calling itself “programmable blockchain”, Ethereum’s technology enables individuals and enterprises to transfer cryptocurrency anywhere in the world using accessible yet highly secure applications. “Ethereum is open access to digital money and data-friendly services for everyone – no matter your background or location,” says the company website, which also lists the following benefits of the platform:

Enabling a whole new generation of secure and incorruptible data platforms, the disruptive potential of Ethereum’s technology and by extension blockchain itself is summed up by the following: “Ethereum is for more than payments. It's a marketplace of financial services, games and apps that can't steal your data or censor you.”

Although the technological sophistication of blockchain and its potential to fundamentally alter the nature of payments solutions seems well founded, there clearly remains industry uncertainty about how the technology is best used. If a company prides itself on delivering exceptional customer service and building trust with its clients, what tangible benefit does it gain from the transparency of blockchain, surely best employed when trust between parties is limited? After all, if an FS provider neglects its responsibilities in a highly regulated sector the potential repercussions are generally sufficient to prevent infraction. Similarly, blockchain’s removal of the ‘middle man’ can serviceably act as a rallying call for greater digital efficiency generally, without the need for actual investment in the technology.

Furthermore, Beard states, the problem is compounded by blockchain still being in its infancy in many ways. “At Xpring, one of the most significant barriers to entry we’re seeing is having a one-size-fits-all solution. Developers don’t want to get locked into proprietary technologies where they are stuck paying fees in a dead-end environment, which is why they turn to open-source technologies.” He relates that at the beginning of 2020, the company introduced its Interledger Protocol STREAM on the Xpring SDK to enable the faster integration of streaming payments within developers’ apps. “While this is just one example of the problems developers are facing when integrating blockchain, we are seeing more solutions that are encouraging the widespread adoption of blockchain technology across industries.”

Blockchain’s potential, then, may increase simply as it is made easier for developers to use; a clear demonstration of its power and utility could be the deciding factor. “Among the industries where blockchain’s potential can be felt most immediately is payments,” Beard continues. “Today’s payments networks are siloed and proprietary. Because blockchain and digital assets can help alleviate this aspect, prioritising its development by providing developers with the tools they need will be an important step on the journey towards digitising money.”

The relative merits in favour of ‘optimising the current system’ versus all-out ‘disruption’ continue to be debated, yet one thing remains clear: blockchain simply cannot be ignored either way. PwC relates in another report that 84% of 600 surveyed executives across 15 territories have investigated the technology to a degree, although the level of attainment remains mixed (for example: 20% are researching; 32% are in development; 15% are live; etc). At the same time, Gartner forecasts exponential increases in global business value generated by blockchain over the next 10 years: $175bn by 2025 and $3trn by 2030. While these figures are encouraging, they should not cause the payment sector to be complacent. As the conversation continues as to whether collaboration with financial institutions (Ripple) or disruption (Bitcoin and Ethereum) is the best method for unlocking next-gen payment solutions, decision-makers and tech strategists must boldly enter the conversation and help shape the transformation underway.

“You can think of Xpring as Ripple’s open-source developer platform for money that allows all developers to more easily integrate payments into their applications,” he states.

“PayID was launched in collaboration with more than 40 partners to save global payments from further fragmentation and make it easier to connect crypto and fiat currencies by providing a single standard that brings traditional finance into the modern era.

“With digital payments expected to increase by 15% in 2020 due to the global pandemic, more payment platforms will be used, and as a result, we’re going to see even more strain across networks. With PayID, both consumers and businesses can benefit from a simplified payments process. Users can easily send and receive any form of money, whether fiat or digital thanks to PayID’s open, ledger-agnostic nature.”