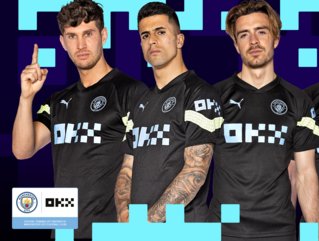 Leading cryptocurrency platform OKX has announced that it will be the Official Training Kit Partner of Manchester City for the 2022/2023 season.

The fintech, which was launched in 2017, is a leading crypto trading app, and a Web3 ecosystem and boasts a 20 million-strong global customer base in more than 180 international markets.

Along with the training kit announcement, OKX has commissioned renowned street artist Akse P19 and Global Street Art Agency to create artworks featuring Erling Haaland, Jack Grealish, João Cancelo, and John Stones across four locations in Manchester. The murals will be fitted out with QR codes that fans can scan for a chance to win their very own season ticket in the OKX Hospitality Box.

The fintech is also the presenting partner of Manchester City’s first global Trophy Tour since 2019 following the club’s fourth title win in five years. The tour will see Manchester City and OKX take the Premier League trophy to the doorsteps of fans in markets including France, Spain, the UAE, Korea, and, for the first time ever, Mexico, Norway, and South Africa.

Speaking about the new partnership, Haider Rafique, Global Chief Marketing Officer, OKX, explained, "The real grit and perseverance is built on the training ground. This is the way we want to nurture new users on our platform. Being Man City’s Official Training Kit Partner helps us extend that mindset from the training ground over to our trading app community. We want our community to learn from that mindset and use our demo trading feature to train for the real exchange just like Man City players train before the beginning of the season. Our partnership with Man City has provided a great platform through which we have the opportunity to educate those curious about crypto and offer those already involved the training they need to participate responsibly."

Roel de Vries, Group Chief Operating Officer, City Football Group, added, “We are pleased to expand our relationship with OKX today, as they become the Official Training Kit Partner of Manchester City. OKX and Man City are aligned on values such as innovation and success and for both parties, everything starts with training and education. Since the initial partnership began in March 2022, we have worked together to ‘supercharge the fan experience’ through a number of exciting content activations ahead of high-profile fixtures during the culmination of the 2021/22 season and we look forward to continuing to develop these opportunities over the coming year.”