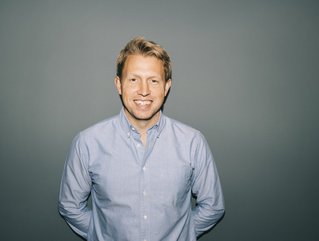 We caught up with Daniel Kjellén, CEO and Co-founder of Tink, to talk Open Banking, starting out and how his fintech dream became a reality.

As the CEO and Co-founder of Tink, Europe’s leading open banking platform, Daniel Kjellén and his co-founder Frederik Hegberg have now seen their brainchild connect to more than 3,400 banks - reaching 250 million customers.

Hailing from Sweden, the world’s most cashless society, its hardly surprising that Daniel Kjellén has blazed a trail across Europe’s open banking scene. But the entrepreneurial former investment banker who launched his first company in 2001 is modest about his achievements and says that the scale and success of Tink have exceeded his expectations.

Speaking to Fintech Magazine, he told us, “I think part of being an entrepreneur is to be slightly naive and over-optimistic about speed and impact. While we always felt that ‘it's [Tink] going to be so much bigger, it's going to grow so much more, etc.’, looking back 10 years, it's just amazing that we played a part in transforming how people view banking.”

But Tink hasn’t just changed the perspective of the marketplace. The fintech has also built a layer of infrastructure that has enabled a new generation of financial services, such as PayPal and others to thrive and gain consumer confidence and adoption. It’s been a transformative power within the industry.

Despite this success, being the CEO and co-founder of a world-leading fintech was not at the top of Kjellén’s agenda when he first started out.

He launched his very first startup in 2001. Prodocon AB was a corporate domain name company that he ran for eight years until the company was acquired and absorbed by the NetNames Group.

Describing his time with the startup, one gets the impression that Kjellén is an enthusiastic entrepreneur, who leads with ideas and handles the nuts and bolts later. Speaking about those early years, he says, “My plan was to go to university when I was just 20-something. By accident, I founded a company that was doing corporate domain in management and started to work there, [and] was the CEO for eight years.”

For a while, the dynamism and excitement of running his own company was a heady experience that delayed any further plans for further education. But soon, with a workforce of 20 employees, he felt compelled to go to university, selecting finance and business for his degree. “I just felt that if I should ever have a ‘proper job’, I also needed to go to university. After four years [of running the business].”

A degree in finance and business

Kjellén worked at Prodocon by day and studied at night. It was a juggling act that he maintained for a further four years.  “Nobody in my class even knew that I was studying the course because I did most of the work in the evenings.”

The university course did offer some social perks as it resulted in Kjellén meeting his wife. “I met my wife, there in my class, so I think that's the biggest achievement,” he recalls.

Soon after graduation, Prodocon was bought out, and in 2008, at the height of the financial crash, Kjellén joined the Investment Banking Division at Carnegie - the leading investment bank in the Nordics at that time, where he stayed until 2012.

“It was supposed to have been one of those ‘make mother-proud jobs’. It ended up not making mother so proud because it was taken over,” he says of the position.

But the role ended up being a sharp learning curve in the world of finance as Kjellén embraced investment banking from a beginner's perspective. “The bank was going bankrupt as a result of the financial crisis… And I think that for me, those four years were extremely educating because as a junior investment banker, you work around the clock. You need to be almost a secretary, with everything in order, papers in order, Excel sheets in order. And as a small-time entrepreneur, that wasn't a top priority before. It was completely untested waters for me, but also extremely rewarding.”

The launchpad for Tink

By now, the financial technology scene in Sweden was making strong headway. Contactless payments were commonplace and the market was ripe for disruption. Kjellén’s entrepreneurial drive led him to a new place of inspiration - and his co-founder, Frederik Hedberg.

He believes the timing was crucial in establishing the business because innovation was starting to mature the industry. “I think that timing in entrepreneurship is probably underestimated. Stars were definitely aligned for someone to disrupt payment and banking out of the Nordic countries for a bunch of reasons. Being cashless, was one of them - and the fact that mobile bank APIs were just starting to emerge in the Nordics.”

A tech-savvy population, an appetite to innovate and a functioning ecosystem in terms of funding were all aligned. "It was the right time, and a perfect starting point for building the type of business we envisaged,” he says.

Both Kjellén and Hedberg had cut their teeth in the investment banking space. Hedberg had also previously built a large technology business and had experience working for a hedge fund in San Francisco.

“We had the edge and keen interest in both technology and finance. We realised personal finance and the payment industry was still very much under the control of large traditional universal banks. We wanted to be entrepreneurs again, and were looking for a place open to disruption where we could have a meaningful impact,” Kjellén says.

Since then, the company has transformed in size and offerings. Initially, Tink tackled the missing pieces in retail banking and the unfulfilled needs of consumers. But both co-founders knew the industry was becoming increasingly data-driven, so turned their attention to technology, creating the building blocks of future banking, with unified APIs that aggregated data, accessed accounts, and handled payments.

There were also many offers of collaboration, but until recently, the co-founders held off. However, In 2022, Tink was acquired by Visa for US$1.75bn and has since skyrocketed.

“We've been through ups and downs over these 10 years. We've had a few people come knocking on our doors wanting to make acquisitions or similar.

He continues, “We've always evaluated this through the same lens, "Is this going to increase the likelihood of us winning and bringing open banking globally?" And the answer previously was, "No." And with the Visa, that was different. Why? Because they believed a lot in this company and wanted to keep it independent, but also gave us the muscles and trustworthiness and the network that Visa has globally. I think that's exactly what we got.”

Kjellén adds, “We still operate as a small, nimble company. But we can take a long-term approach. We spend a lot less time trying to explain who we are, that we can be trusted, that we are going to be around 10 years from now, etc.. Instead, people realise, "Well, you're part of Visa," and we can tick the box. Now, we can focus on what can we do together. I think that it's an amazing opportunity.”