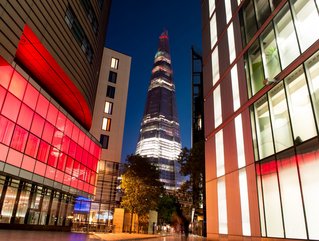 The UK government's latest U-turn will not be enough to calm markets, analysts warn, as Prime Minister Liz Truss marks a turbulent first month in charge.

The UK government’s plan to drop a controversial tax cut for the highest earners will not be enough to calm turbulent financial markets or restore investor confidence in the UK, the CEO of deVere Group has warned.

Nigel Green – boss of the Dubai-based financial advisory, asset management and fintech organisation – claims the government’s U-turn “stinks of desperation”. He welcomes the decision from the newly appointed Chancellor to bring forward his scheduled medium-term fiscal plan, accompanied by a forecast from the Office of Budget Responsibility (OBR), from 23 November to later this month.

“Bringing forward the plan to this month… underscores just how badly the so-called ‘mini budget’ was received by financial markets. Having the announcement sooner rather than later is the right thing to do, as the longer the markets wait for proof that the government’s fiscal agenda is sound, the higher the risk of turbulence.”

Investor trust in UK ‘has had a hole blown through it’

In a mini-budget on 23 September, Chancellor Kwasi Kwarteng announced a package of measures to support households facing energy price rises – as well as plans to eradicate the additional 45p rate of income tax for earners receiving more than £150,000 per year, roughly five times the national average.

The latter proposal resulted in a backlash among investors, with the pound falling against the dollar to an all-time low of $1.0373 – down from $1.1574 when Liz Truss became Prime Minister exactly one month ago today. The pound has since returned to a similar valuation to before the announcement (around $1.1250), but not before an intervention from the Chancellor himself.

On Monday, Kwasi Kwarteng scrapped his plans to remove the additional rate of income tax, facing a potential rebellion from his own MPs. But although unpopular, it was not the only fiscal measure announced in the mini-budget. The basic rate of income tax (for earnings between £12,571 and £50,270) is still expected to be cut from 20% to 19% as part of more than £40bn’s worth of broader tax cuts. Many worry that it will force the government to reduce spending on public services, with Paul Johnson of the Institute for Fiscal Studies warning that the current proposals “will not be enough to plug the fiscal hole the Chancellor has created for himself”. 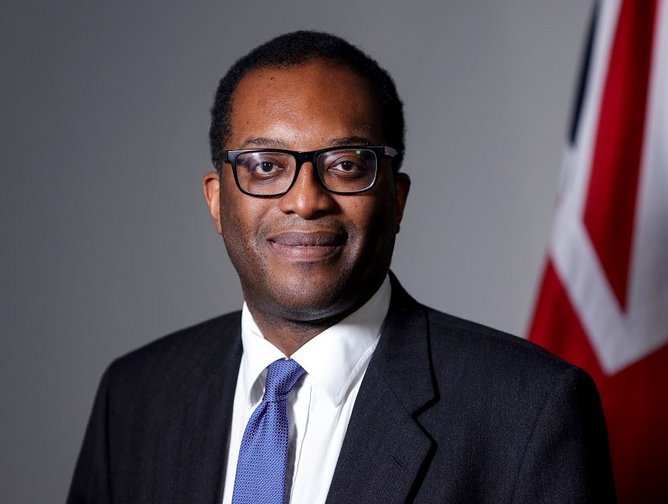 The Chancellor has scrapped plans to cut tax for the highest earners. © UK Government
Since the country emerged from the COVID-19 pandemic, government spending has soared. The two most recent Conservative prime ministers have cut taxes by over £40bn; announced energy support that could be worth more than £100bn; written off £9bn’s worth of personal protective equipment (PPE) that was either substandard, defective or unusable; lost £15bn through fraud or error in COVID-19 support loans; and presided over the spiralling cost of a £100bn high-speed rail project that will see journey times between Birmingham and London reduced by 29 minutes.

Nigel Green continues: “Sterling did regain some ground higher against the dollar and gilt yields fell on the scrapping of the 45p rate announcement, but the pound will remain under pressure and high bond yields remain of serious concern. Investors’ trust in UK plc has had a hole blown through it.”

He is far from the only person to speak out against the government’s economic plans. On 20 September, US President Joe Biden tweeted that he was “sick and tired” of trickle-down economics, where higher earners are given economic stimuli in the hope that it will benefit the poorest too. President Biden claimed the approach “has never worked”; the tweet was widely regarded as a thinly veiled swipe at the UK Prime Minister.

We asked you on LinkedIn whether a devaluing pound and international criticism of the UK's fiscal policy would cause fintechs to lose confidence in the UK. More than 250 of you responded, with 44% – over half of those who expressed an opinion either way – saying that it would damage Britain’s brand. 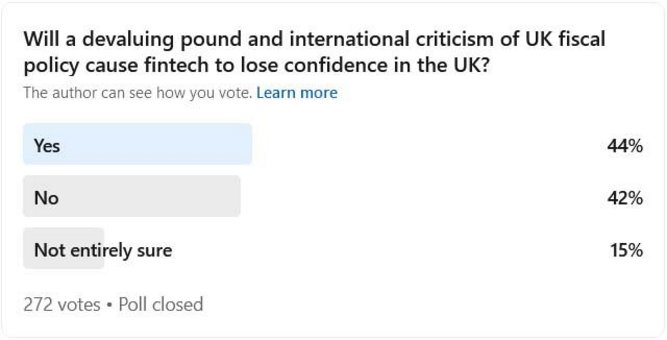 Susannah Streeter, Senior Investment and Markets Analyst at Hargreaves Lansdown, says: “The great Truss retreat on tax saw the pound surge briefly in value, jumping above $1.12, up by around 1% in a matter of minutes just after rumours swirled about the move. It’s lost some of its bounce, though, as the financial markets digest the latest political turmoil to beset the UK. The Prime Minister was hoping to carve out a reputation as the new Iron Lady; instead she will be seen as highly malleable. She has been manipulated into this U-turn after senior Conservatives came out in open revolt at the treasury’s decision to scrap the 45p tax band for the wealthy while refusing to rule out cuts to welfare for the poorest.

“Admitting to a communication mistake rather than a serious policy mishap didn’t cut it. Now this embarrassing climb down, taking unfunded tax cuts off the table, which Chancellor Kwasi Kwarteng has called a distraction, will help reassure the markets a little that the more reckless nature of this new administration can be reined in by the Conservative party.”

And Riz Malik, Director of specialist mortgage brokerage R3 Mortgages, warned that it could take some time for the market to return to normal. Hundreds of mortgage products were reportedly withdrawn overnight as a result of the crashing pound and rising interest rates, with some buyers saying their mortgage provider rescinded offers.

“The OBR’s response to the mini-budget needs to happen as soon as possible to potentially undo some of the damage that was done last week,” Malik says. “Even if the markets respond well, I fear mortgage lenders may take some time to reflect positive news in their pricing. We may see further U-turns at this rate.”