“I was the CEO of a fintech for about a year and a half, and I wish I’d known about Appian back then,” Rick Browne, Regional Vice President Financial Services APJ for Appian, quips.

That first-hand experience gives Browne, a seasoned technology executive, a unique insight into the pains endured by fintechs and financial service providers. Browne has enjoyed a varied career, living and working on four continents. He started in North America before spending seven years in Latin America and four years in Europe. He has spent the last 12 years in Singapore, where he is based today.

“Appian is an application platform that allows you to do a very complex thing in a simple way,” Browne explains deftly. The low-code platform lets businesses build powerful applications quickly and on an enterprise scale, combining process mining with drag-and-drop functionality. The business works closely with a wide breadth of financial partners including large banks, capital markets firms, insurance companies and lenders.

One of the jewels in Appian’s crown is its speed-to-implementation. “We build applications 10 times faster than traditional ways,” Browne tells us. For fintechs in particular, this is incredibly important. The time advantage means that Appian’s partners can scale rapidly by effortlessly rolling out new workflows and applications; the end-result can be duplicated across other product lines or different geographies, while the cloud-based nature allows them to integrate with existing ecosystem partners or SaaS components.

Appian proud of its ‘amazing’ partnership with Pepper Money

Among its most significant partnerships in recent years is the work Appian has done with Pepper Money, the largest non-bank lender in Australia and New Zealand. Competition for talent is so fierce that companies increasingly struggle to attract Java or .NET developers. By adopting low-code solutions, they can instead reduce the complexity of taking an application to market and increase the “diversity of talent” within their ranks at the same time.

“The partnership with Pepper Money is nothing short of amazing,” Browne says. “The things we're doing with them today are market-leading. Pepper Money saw that they needed to rethink how their business is being built. They were building things with many different systems piecemeal together, complex underwriting and lending decisions were sitting in very complicated business rule spreadsheets, and they needed to do something differently. They saw the future as being low-code because it allows them to innovate, do more with less, and bring products to market faster.”

Pepper Money’s CEO challenged Appian to demonstrate what was possible in the space of a weekend. Browne and his team worked around the clock to have something ready by Monday morning. When time is your biggest cheerleader, prospective clients often lay gauntlets like this. By opting for Appian, Pepper Money were able to build a new mortgage broker lending application for New Zealand, going from concept to production – in a market where they’d never had a presence before – in just three months.

Appian’s success has brought it growth of about 35% a year; in Asia Pacific, it is doubling that growth rate on an annual basis. “We’re looking at basically a fire hose of growth,” Browne tells us as he looks ahead. “As we manage this tremendous growth, a big priority is also retaining this great culture we have. Clients know we have the best platform, but they also know we have the best people. So we're looking for the best people to be a part of the best platform, and help clients who want to innovate on Appian. That's the fun we have ahead of us.” 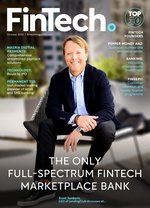