Amazon and Stripe double down on their payments partnership 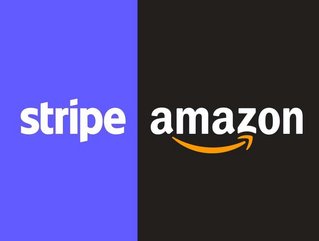 Amazon and Stripe are 'significantly expanding' their partnership, with Stripe becoming a strategic payments partner in Europe, the US and Canada

Amazon is “significantly expanding” its partnership with payments fintech Stripe.

The two companies have been working together since 2017 but the new global agreement will “deepen” their partnership, the firms say. It will see Stripe become a strategic payments partner for Amazon in the US, Europe and Canada, processing a significant portion of payments volume across businesses like Prime, Audible, Kindle and Amazon Pay.

The reciprocal agreement will also see Stripe make more use of Amazon Web Services (AWS), the ecommerce giant’s cloud infrastructure platform, to run and grow its business. Stripe’s reliance on AWS has already allowed it to scale and support millions of online businesses – but now, the fintech will take advantage of AWS’ growing suite of services including Graviton, which is used for efficiency and performance in data processing.

Partnering with Amazon is the ‘best path forward’

Max Bardon, Vice President of Payments at Amazon, says: “Stripe has been a trusted partner, helping accelerate our business at every turn. In particular, we value Stripe’s reliability. Even during peak days like Prime Day, Black Friday and Cyber Monday, Stripe delivers industry-leading uptime. We appreciate Stripe’s relentless commitment to putting users first.”

David Singleton, Chief Technology Officer of Stripe, adds: “We couldn’t run without AWS – and we wouldn’t want to. AWS is our customers’ first choice. The platform gives Stripe enormous developer leverage, which we then deploy in service of our users. As we look at the decade ahead, it’s clear the best path forward for Stripe and for our users is to partner more closely with Amazon.”

Finally, AWS CEO Adam Selipsky says: “Stripe has entrusted AWS with their core operations for over a decade and we take that responsibility seriously. In expanding our partnership, we’re honoured to do our part in supporting Stripe’s continued global growth for years to come.”

Partnering with industry heavyweights is not new to Stripe: in July last year, Stripe announced a partnership with Revolut to support the company's global expansion.