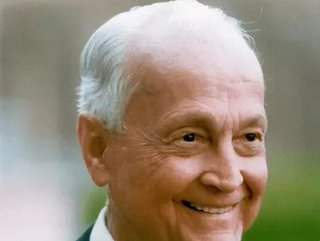 Living through practically every major event of the last century, Sir John Marks Templeton’s financial and investment acumen made him both one of the world’s richest people and one of the most generous philanthropists in history.

Born in Winchester, Tennessee, Templeton attended Yale University - paying his way using poker winnings (he was a skilled player) - and graduated in 1934 near the top of his class. With the world still in the throes of the Great Depression, he traveled to the UK to attend Oxford University where he was a student of Benjamin Graham, later known as the ‘father of value investing’.

Templeton learned quickly; in a masterful display of the ‘buy low, sell high’ ethos, he purchased 100 shares of each company on the NYSE valued at less than $1. Reportedly, he did so at the dawn of World War II, which soon generated him a sizable profit as US industry subsequently began to accelerate.

Now a significantly wealthy man, Templeton reached billionaire status through his pioneering use of globally diversified mutual funds. Establishing his own Templeton Growth Fund in 1954 (now part of Franklin Templeton), he created specific industry funds for new sectors like nuclear power and electronics, as well investing in emerging markets like Japan.

In 1999, Templeton was hailed as ‘the 20th century’s greatest global stock picker’, a reputation he earned not only for his results but also his perspective and attitude to investment. Usually only picking stocks that he considered undervalued or otherwise with solid long-term profitability, Templeton favoured fundamental analysis instead of technical, believed strongly in ‘going against the grain’ of public opinion, and even partially attributed his fortune to staying positive, relaxed and disciplined at all times.

Over the course of his life, Templeton donated over $1bn to charitable causes. In 1987, he was made a Knight Bachelor in the UK for services to philanthropy. He also created the John Templeton Foundation, an inter-religious organisation dedicated to spiritual understanding through scientific research. It was for the latter that Time named him as one of the world’s ‘100 Most Influential People’ in 2007.

These achievements hint at Templeton’s contrarian character: despite being one of the world’s richest men, he spurned consumerism, lived frugally, and generally avoided luxury. Truly, Templeton was a skilled and complex individual, and a finance industry legend in every sense.

Each month, FinTech Magazine will be summarising the lives and careers of the most significant figures in finance. Read about them - as well as industry stats, infographics, exclusive interviews, and more - in our new 'Upfront' section.