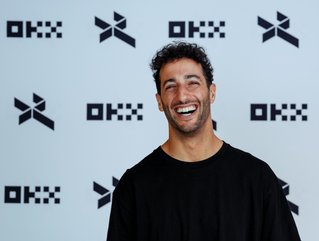 It cements OKX’s relationship with McLaren, having been named official primary partner of the McLaren F1 team and McLaren Shadow e-sports team earlier this month.

The partnership will include a global campaign, supported by Ricciardo educating fans on cryptocurrency trading, as well as collaborating with designers from underrepresented communities to create a special-edition racing helmet to be worn during a race.

OKX promises they will give Ricciardo fans “an intimate insight into his crypto trading journey, with the chance to get to know him away from the racetrack”.

The sponsorship will be seen for the first time at this weekend’s Monaco Grand Prix, where OKX branding will be visible on Ricciardo’s racing cap.

Haider Rafique, chief marketing officer at OKX, says: “After spending time with Daniel talking about his passion for crypto trading but more importantly his desire to learn, it was obvious he is a seamless fit for OKX. The lovable F1 favourite will be integral in helping us expand the reach of OKX, supercharge the fan experience and educate new audiences on the benefits of trading responsibly with crypto. We are thrilled to be able to announce our long-term partnership ahead of the iconic Monaco Grand Prix, a race that is so special to Daniel.”

Daniel Ricciardo says: “It is an exciting time in the world of crypto, the possibilities are endless. I’m honoured to partner with OKX, who are one the leaders in this space. They truly value their customers, and education, transparency and security is paramount to them. The fan experience is going to be at the centre of everything we do together, so expect big things from us this year. Game on!”

OKX boasts 20 million users – including Ricciardo – in more than 180 international markets, allowing them to trade popular digital assets like Bitcoin, Ethereum and Tether. The company says it’s experiencing incredible growth: trading volume on the platform increased by more than 700% in 2021 and the number of trades executed rose by 480%.

Ricciardo is one of the most popular out of the current crop of drivers, in his 11th season in F1 and his second year at McLaren Racing. He endeared himself to fans in the Netflix documentary Drive to Survive, which gave viewers a look behind the scenes of the sport. Ricciardo was born in Australia in 1989 and previously raced for Red Bull, Renault and Toro Rosso.