Quontic: Defining the culture of a truly digital bank

View Full Report
Patrick Sells, CIO at Quontic Bank, explains why innovation should not stop at technology and why getting the right culture is essential in fintech...

2020 has been a difficult but transformative year for finance: COVID-19 has led to a shift away from old paradigms, remote working has been validated as a valuable tool and digital transformation is redrawing the industry’s roadmap for the future. Emblematic of this brave new world, Quontic Bank is a disruptive banking platform which transcends the bank-FinTech divide and harnesses the best of both worlds to deliver best-in-class customer outcomes. Founded in 2009 and headquartered in New York, the bank is a self-proclaimed champion of “underdogs, entrepreneurs, gig-economy workers, immigrants,” and all others currently not best served by the ‘legacy banking’ establishment. Quontic Bank believes in empowering its customers to take control of their finances, recognising that no person’s circumstances are the same as others and proving that better solutions are available to those who seek out innovation.

Leading this aspect of Quontic Bank’s business is Patrick Sells, Chief Innovation Officer. A true disruptive digital banking executive, Sells initially got his start working on digital marketing for small companies whilst attending Taylor University. “This was right after the recession and it was an interesting time to get into business,” he recalls. “I thought banking was ripe to be done differently, especially community banks.” Sells’ connection to Quontic Bank started when he met CEO Steven Schnall, with whom he shares a mutual interest in the evolving cryptocurrency market. The two quickly established a friendship and developed some projects together and it was in late 2018 that Sells finally joined the team. “We had a lot of mutual interest: I had been wanting to get into the banking industry to try something new and Quontic needed to become a digital bank. I sold most of my company (Sells Group Holdings) and went all-in on this idea of re-imagining what a bank could be - the digital bank of the future.”

Recognised as 2020’s ‘Digital Banker of the Year’ by American Banker and also one of ICBA Independent Banker's ‘40 Under 40’, Sells has managed to carve out a formidable reputation in the industry. Possessing a talent for and enduring interest in innovation which befits his role at Quontic Bank, he states that early experiences taught him the value of trying to imagine operations from different perspectives. “When you're in the middle of doing something it's really hard to reimagine things. But, when you are able to truly step back and reframe the world around you, you can easily find innovation. A lot of what I've done at Quontic Bank has been saying, ‘Okay, what if we thought about it very differently?’” Indeed, the Bank is no stranger to accolades itself; it was recently ranked as one of Bankrate’s 2020 ‘Top Online Banks’. When asked what he attributes this success to, Sells claims that Quontic Bank’s culture and mission to redefine what a ‘digital bank’ is has been pivotal to its acclaim with customers and the wider industry.

Corporate culture could be Quontic Bank’s most important quality. Based on a four-pillar philosophy, Sells makes a clear distinction between his organisation’s approach to culture and others: “So many companies have ‘core values’ that are simply, what I call, ‘permission to play values’. They're not unique to them and so they don't become a shared language.” Instead, Quontic Bank allows the following principles to guide its daily operations: 1) Progress not perfect: a steady state of constant improvement is favoured over rapid quests for unattainable perfection; 2) Try it on: emphasising a fast-paced decision-making process, Quontic Bank is willing to try new ideas, retain the ones that work and discard those that don’t; 3) Know the goal: before embarking on a new direction or endeavour, the Bank coordinates with its teams to establish a singular vision; and 4) Say cheese: Sells explains, “When someone puts a camera up in front of you and says, ‘Say cheese!’, what happens? You smile and the person taking the picture smiles too. Imagine a bank that you actually smiled when you talked to.” Sells adds that the need for remote working as a result of the pandemic has indirectly added to the Bank’s culture too: “Before COVID-19, we’d usually only hire people from the New York area. However, during this time, we’ve hired 30 or 40 people from outside and it's enabled us to work with and find great talent further afield.”

When it comes to Quontic Bank’s ‘true digital bank’ concept, Sells states that a fallacious dichotomy between traditional banks and modern FinTechs has obscured the true vision for what the idea could achieve. “In many ways, when banks hear the term ‘digital bank’, they assume it means empowering FinTechs and not playing an active role in their customers’ lives anymore. I don't think that's a good thing for the industry.” On the contrary, Sells argues, it is only by combining the best aspects of both that banking can meet the challenges of the post-COVID-19 ‘new normal’. “A true digital bank would actually use technology to provide a better experience and add meaningful value to the customer beyond just being a list of debits and credits behind the scenes,” he continues. “We should also be building technology that solves our problems, selling it to other banks and helping them become truly digital too. imagine building technology that actually helped our customers accomplish the things in life that they want; that's at least partially what being a true digital bank means.” In fact, Quontic Bank receives daily enquiries from other banks seeking advice on how to adapt. Sells adds that the organisation is currently adapting this aspect of the business into a more scalable solution to help others across a wider scale.

Quontic Bank’s approach to certain aspects of digital transformation, such as data utilisation, correlates with contemporary industry trends: “Data can be used to help customers gain a better financial life and empower them financially. Every bank is trying to figure out how we can begin to harness and leverage data better.” However, Quontic Bank’s exceptional customer-centricity shines through in its philosophy towards tech innovation. “I think the most important thing to consider is the customer’s experience,” Sells explains. First and foremost, the bank tries to gain perspective on how its customers interact with it and learn what improvements can be made through first-hand experience. This could involve something relatively simple like app/website performance or the ease of opening an account, or it could be more complex like the transactions process. Although considerations surrounding regulations, security and data integrity should always be paramount, Quontic Bank prides itself on delivering a quintessentially tech-optimised service designed with its users in mind. “If you look at our roadmap, we are going to be rolling out some new products that have never been seen before in the industry to provide a new type of experience,” Sells states. “The reason why people need online banking is because mobile apps aren't good enough yet. Quontic Bank wants to build a mobile app that allows you to do everything easily from the click of a button.”

Mantl: “When COVID-19 first happened, we wanted to roll out a new product called ‘Drawbridge Savings’ - an account to help people do social good wherein Quontic Bank will match the monthly interest credited for each account and donate it to the #BeTheDrawbridge relief fund. Mantl helped us build that product and launch it in three days, which would be unheard of with other providers. Mantl represents the type of true Fintech-bank partnerships that are needed. Banks need to move beyond treating partners as ‘vendors’ and have real relationships with them. It’s a great relationship and partner of ours.”

Table Group: “Table Group is focused on helping companies build a competitive advantage. It was critical in helping us refine our mission statement, who we are, what our core values are and how we make decisions. Table Group and our consultant there, Rick Van Arnam, have taught us and many other companies that the only true competitive advantage today is that of being healthy. That means the whole organisation needs to be aligned, clear on ‘who’ it is and working together seamlessly.”

Hunton: “It’s a great law firm but it's more than just a law firm advisor: they are friends that have helped us as we've started to do new and innovative things. Hunton helps us understand how we can do it in the safest and best way. Peter Weinstock has been our sherpa, if you will, guiding us every step of the way.”

Alloy Labs Alliance: “Alloy Labs is a new consortium of banks. There are probably between 40 and 50 banks in there, all with different stories than ours but similar objectives. The organisation provides a platform for us to work together and collaborate.

When he considers the progress that Quontic Bank has managed to accomplish throughout 2020 despite the difficulties of the pandemic, Sells is proud to say that 2021 will not be a case of addressing ‘unfinished business’. “We've kept up with what we wanted to achieve in the sense of overall progress towards our mission and vision. We never would have guessed that, in partnership with Intuit and other Fintech platforms, Quontic Bank would have facilitated over one billion PPP (Paycheck Protection Program) loans to small businesses.” It could be argued that the bank has actually managed to gain momentum during this time rather than lose it. 2020 might have been a year no-one expected, but Quontic Bank has still managed to go from strength to strength. Indeed, with Sells’ visionary leadership and the bank’s celebrated conception of the ‘true digital bank’, why should it not have? Innovation courses through the organisation, yet it doesn’t stop where most companies would choose to leave it: technology. “The word ‘innovation’ has become synonymous with technology,” he says. “In doing that, the wider banking sector has failed to truly understand the other opportunities for innovation, from culture to training, recruiting and how people work.” Quontic Bank is refusing to fall in line with this trend, safe in the knowledge that cultural change, though difficult, is ultimately the only genuine way to usher in a new era for banking. “Innovation isn’t a problem that can be solved by buying something; you have to change who you are and what you do.” 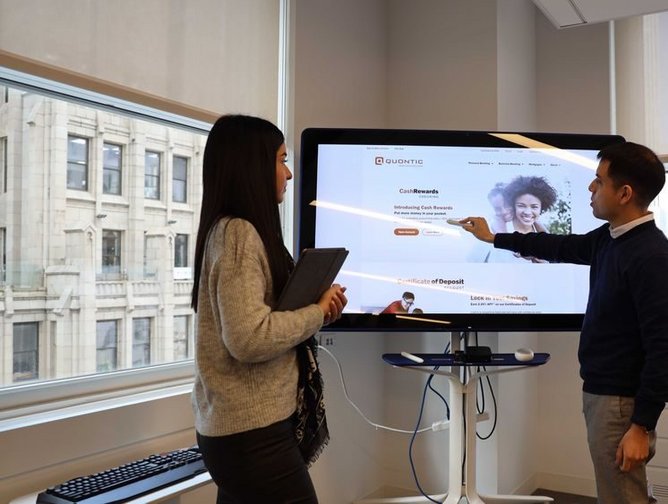