Inside the launch of Recreo Financial’s OneTrust platform

Over the last decade, the advent of new technologies and business practices has seen a pervasive digital transformation sweep across the globe. Companies in global and domestic markets, across every industry, are feeling the pressure to adapt and adopt new solutions. Those that don’t take steps to become the disruptors are at risk of being disrupted themselves.

However, digital disruption has been more pervasive in some industries than others. In the Australian superannuation sector, for example, rigorous compliance and regulatory structures, as well as significant operational complexities, have created high barriers to market entry.

“Superannuation platforms in Australia are ageing, with the most commonly used platforms dating back over 20 years. There has been limited innovation.” So explains Dan Renoux, Head of Product at superannuation technology firm Recreo. “These ageing platforms are difficult to maintain and now lack the features required to administer a fund in the modern day,” he adds. “Historically, trustees and administrators developed bespoke versions of platforms in order to support manual administration practices but nowadays it’s about automation and admin by exception only, which is harder to achieve with older technology” says Renoux, who would know as he’s been working in the superannuation business since leaving university in the late 90s.

Petros Gionis, who took over as CTO of Recreo in September 2019, notes that, not only is the technology the superannuation industry is built on a complicated beast, but the industry itself is no picnic. “It’s a complex ecosystem. There are multiple superannuation providers in Australia, ranging from industry super providers - who manage funds for a specific sector like mining, health services, retail, etc. - and then you have the big retail funds offered by the banks - which are typically run-for-profit funds,” he explains, noting that, “more or less every one of those providers over the last 30 or so years has built its own bespoke superannuation system or, if not, has purchased one from a legacy vendor.” He adds that these systems are still, by and large, based on old technologies that companies today end up spending tens of millions of dollars on to keep functioning.

We spoke with Gionis and Renoux to find out more about Recreo’s ambitious, disruptive project, the challenges they faced along the way, and what’s next for the company poised to change the face of superannuation forever.

Created in 1992, superannuation is a compulsory employer and employee contribution scheme designed to provide income streams and lump sum payments to retirees. It’s similar to national insurance and pensions in the UK and social security in the US. The money collected (which started out as a legislated 3% of salary contribution by employers and is slated to reach 12% by 2025) is reinvested in the economy, something Renoux says has been a real saving grace. “We’ve got these massive pools of cash that create buffers throughout the economy. It’s a fantastic safety net in lots of ways,” he explains. “It’s funded infrastructure throughout the country, it’s kept the stock market a lot more buoyant than it otherwise might have been, there are tons of benefits.”

Collecting, managing, investing and redistributing these vast pools of capital is a complex financial and regulatory task. Recreo believes that its new OneTrust system can not only improve on existing platforms, but also help create efficiencies for its users.

“Recreo is the first company to do superannuation administration in the cloud,” says Renoux. You look at some of these companies that are dragging the ball and chain of legacy solutions, and they’re spending tens of millions a year upkeeping all these old systems that can’t do what they need them to do.” Gionis adds that these legacy systems are frequently deployed in house, which incurs a capital hit - as companies need to invest heavily in server infrastructure, databases and software licenses to ensure systems are supported and compliant. He recalls that, “in previous roles when all we needed was an environment to do some testing, there was often a six week lag to provision that and the project went into the region of hundreds of thousands of dollars just to spin up a temporary environment to run a superannuation system in test mode.”

With Recreo’s cloud native solution, high up-front costs and lengthy setup windows are eliminated. “We can spin up an environment in a matter of days,” says Gionis. “I think those advantages are too good to ignore, which is where a lot of the legacy players can’t compete or keep up.” Not content to rest on its laurels, Recreo’s teams are setting even more ambitious goals for themselves: being able to spin up complex superannuation environments in the cloud in a matter of minutes. “The fact that Recreo’s timeframes for releases are measured in days rather than months - that was a real eye-opener for me,” recalls Gionis. “It’s great that we have the agility to deliver for our customers faster than our competitors made possible by our talented team and our leading-edge cloud infrastructure. It’s a real competitive advantage,” he adds.

“Being able to quickly spin up and down environments and scale the specifications of servers with customer’s requirements have allowed pay-as-you-go pricing structures. Ultimately, the less a customer consumes the less they pay,” Renoux states.

When needs change, environments can simply be switched off or scaled down and the costs go away. No servers to repurpose or sell, no long-term licenses sitting unused; the age of superannuation as a service has arrived.

Safety in the cloud

Australian superannuation fund assets totaled approximately $3trn at the close of 2019. Recreo’s first customer, Mine Super - which represents mining and related assets across Australia - accounts for $11bn in superannuation funds. With such vast amounts of capital being moved, invested and distributed to fund members, security and threat prevention in the industry is a top priority. Offering superannuation administration services through the cloud means that the onus for protection is shifted from on-premises security to Recreo itself. Both Renoux and Gionis are confident that the company’s offering provides a step up in security over other competitors.

“We obviously take cybersecurity very seriously, as does everyone in this sector, but we come at it from multiple angles,” Gionis explains. “First, we utilise all the Amazon security protection features that are available to us, and operate our environments in line with best practices as espoused by AWS. Over and above that, we also have our own coding and security guidelines that we adhere to. We are ISO27001-compliant and have been through checks by the Australian Prudential Regulation Authority (APRA) to make sure we’re compliant there as well. Obviously, our customers also risk assess and audit us as well, and the other thing we do is engage suppliers like TSS Cyber, which offers threat detection and event monitoring.”

Based in Canberra, Australia, TSS Cyber is one of Recreo’s most valuable strategic partners. “They’re a massive help to us,” adds Renoux. “They look at the traffic through the system to make sure nothing looks wrong - so apart from all the systems we have in place ourselves, we also have teams of people monitoring the data all day, every day, to make sure that anything abnormal is identified, digested and flagged for action immediately.” By harnessing the power of the cloud and Recreo’s partner ecosystem, OneTrust can boast a more watertight cybersecurity proposition than the industry has seen before. “what we’re trying to do,” Renoux adds, “is build a simple, scalable and most importantly secure platform that will outperform anything currently operating in the market.”

Cybersecurity isn’t the only area where Recreo is turning to its partner network to ensure its offering is best-of-breed. In today’s digitally transformed world, the companies engaging with specialist vendors and partners throughout their ecosystems are providing better, more comprehensive services at lower costs. “One of the strategic decisions we made last year was that we weren’t going to try to be everything to everyone,” explains Renoux. “You can get quite confused quite quickly trying to fulfil every role in the superannuation ecosystem - it’s a very big, very diverse space.”

By engaging partners like Tata Consultancy Services - which provides the resources that allow Recreo to flexibly scale up and down in an agile way - and MongoDB - which has lent its powerful database solutions to the OneTrust project - Recreo’s team has been able to focus on the important things that set their offering apart. “What we wanted to do was to be the best superannuation platform,” says Renoux. “But we’re not necessarily focusing on trying to be the best at everything by going it alone.”

Gionis agrees: “Our strategy is to bank on our strengths and leverage them but, where we have a gap, absolutely look to our partners to fill that gap. All in all, that makes Recreo a stronger platform than it would be without its partners.”

Cooperation and collaboration is also a vital part of Recreo’s internal structure. Gionis acknowledges that successfully managing his teams is a critical piece of the puzzle. “I’ve got a lot of talented, really bright engineers, architects, and business analysts. A lot of our IP resides in their heads,” he explains. “A big part of my job is keeping them motivated. I want them to come to work because they love it, love the technology that they’re working on and love solving the problems that they’re having thrown at them every day.”

Recreo plans to continue making use of its partner ecosystem and the expertise of its teams as it goes forward. Renoux explains that he and Gionis have a two-pronged approach to the coming year. After the mad dash towards launching OneTrust in September 2019, now is a good time to take stock and start putting effort into ensuring the platform lives up to their high standards. “It’s a new platform. We’ve been in production for about seven months now and we need the system as a whole to be working optimally,” explains Renoux. “We’re bedding down this already-strong platform and making sure that it’s as bulletproof as it can be.” As a systems architect of over 25 years, Gionis notes that he’s never worked with a system where things haven’t gone wrong. “When things do go wrong, we want to make sure that everything is traceable and recoverable.”

The other aspect of Recreo’s plan is to embrace the power of integrated digital offerings to ensure that OneTrust is the best complete offering that it can be. While Recreo makes sure its core offering is bulletproof, Renoux notes that this is the year where the team is going to start adding “wow-factor” features. “We’re talking about digital communications, segmentation, an improved front-end portal, cross-platform interactions, notifications - all that flashy stuff in a unified, seamless experience.”

Looking back over the incredible journey that has resulted in OneTrust - the first cloud-native superannuation platform - Renoux shakes his head. “It’s honestly a bit mind-boggling to comprehend when you consider that many have tried to achieve what we have accomplished and failed,” he says. Before signing off, Gionis adds: I can’t understate how complex this undertaking has been. The folks at Recreo have done an incredible job to get the platform where it is today.” 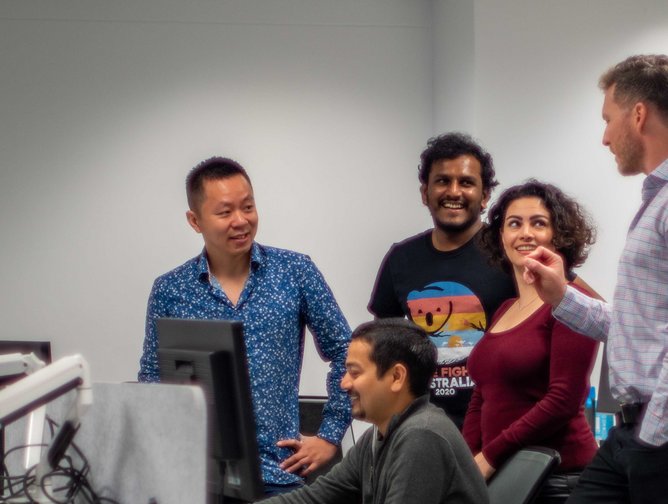 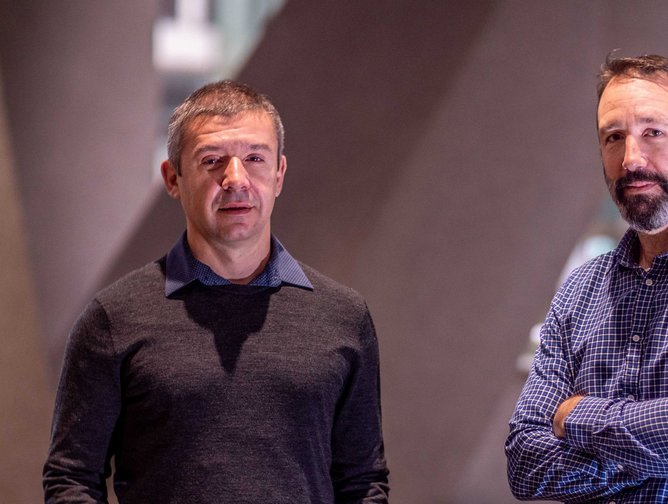 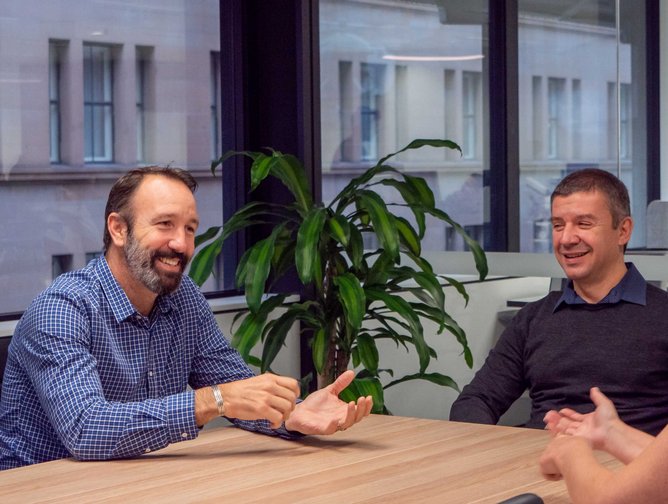