In the American insurance and financial services markets, Nationwide ranks amongst the best. Today, the Fortune 100 company stands as the number one company for total small business insurance, the number one underwriter of farms and ranches, as well as the nation’s leading pet insurer. But its list of accomplishments doesn’t stop there: it’s also the 8th largest provider of defined contribution plans, number 1 in 457 plans, the 8th largest life insurer and much more. Spanning personal lines, commercial lines and financial services, this diversity has allowed Nationwide to carve a unique path as a one-stop shop for insurance. Though, as Guru Vasudeva, Senior Vice President and Chief Information Officer (CIO) of Program and Application Services, points out, the insurer’s competitive edge undoubtedly lies in its customer-centric ethos. “Nationwide is a mutual company, which means our customers own us,” Vasudeva explains. “As the organization evolves, we are really focused on doing what is good for our customers, our employees and the communities where we operate.”

Digitization is shaking up industries across the globe, and it seems the insurance and financial services sectors are no exception. Recognizing that its business is information-centric and reliant on IT, Nationwide has embarked on a root-and-branch digital transformation to ensure it can continue to deliver a world-class customer experience for years to come. “The products that we create are all information-based; they’re not products that you can touch and feel,” observes Vasudeva. “IT is the manufacturing arm of any financial services and insurance company. Our Board and our senior leadership recognized this a long time ago and, ever since, we have been on a journey to build a globally competitive IT capability inside Nationwide.”

Nationwide has put its weight behind this digital disruption since 2009. The company spends more than US$1.3bn on IT every year, of which around $500mn is allocated to technology-enabled transformation programs. It has also invested a huge amount of software development, with around 5,000 to 6,000 full-time employees and contractors writing complex code on a daily basis. To improve this mammoth process, Nationwide set itself an ambitious goal to transform the way in which it develops software by blending four trailblazing strategies: Agile, Lean, DevOps and continuous learning. This is no easy feat, and the journey is far from over. But Guru is certain that it will be a recipe for success. “A lot of people have just done Lean or Agile, but I think by bringing these four strategies together, we’ve done something unique,” he notes. By releasing software faster and at a higher quality for a lower cost, he says this plan hopes to not only help Nationwide achieve its business goals, but it will also reimagine the customer journey.

Keeping its finger on the pulse of the latest business strategies, Nationwide began its software development transformation a decade ago. In 2009, the firm centralized its IT function, sharing areas such as its data centers, infrastructure, security platforms and more. In fact, it also realized it could centralize and optimize the methodology and practices used in software development – the same year, Nationwide made its first foray into Agile methodology. Whilst Agile wasn’t new, it was now broadly adopted across all its enterprises for the first time. For Guru, the next step was to see if Agile could work for large transformation programs. “Our experimentation with Agile goes back a long time ago when we had small teams experimenting with this methodology,” Vasudeva recalls. “But we wanted to see if we could scale Agile at an enterprise level. In other words, could we start using it for almost all software development?”

“We brought these Agile teams together and asked them if they could harmonize the methodology. That’s because we believed that if you had a fine-tuned process then we could create a shared capability in which you could reuse the repeatable processes, methods and tools. It was really hard because people in these fields are very focused on their own version of Agile. But, in the end, it was very successful, and we began to slowly build our Agile development center.”

But Agile was just the first building block in Nationwide’s transformation. Wanting to take this a step further, the insurer and financial services provider decided to scale its use of Agile substantially in 2011, so it employed Lean techniques to achieve this. Harking back to the early days of industrialization, Nationwide adopted the idea of a so-called “software development factory” complete with development lines that would finish one step needed to create code. By giving each line a clearly defined role that it could repeat (such as scrum master, tech lead, requirements lead and test lead), this helped to enable rapid development of code, as if it were a factory. The insurer also implemented a visual management system, allowing developers to gain information on the shop floor quickly, as well as Gemba Walks – a fundamental Lean management philosophy. “Gemba Walks enables leaders to visit the shop floor and to see first-hand the issues teams are facing,” notes Vasudeva. “It allows information to flow from frontline teams to senior management in real time. Leaders also become more enmeshed within the workings of the factory instead of managing it in a spreadsheet or a dashboard.” Wanting to scale this even further, Nationwide also showed that these cutting-edge methodologies could be used not only for computer programming languages like Java but could also be applied to Cobol, Packages and ETL code.

This mammoth investment, Vasudeva says, was starting to pay off. By 2014, Nationwide’s software development teams had proven better quality and better productivity using industry benchmarks, and it had also created up to 50 development lines. However, Agile methodology wasn’t entirely widespread, it only covered less than 30% of software development at Nationwide. “We conducted a Gartner benchmark that showed that our Agile development line was better than the industry standard in terms of productivity, however Nationwide as a whole was still 7.8% worse in unit cost compared to the industry. We estimated that we could get close to 12% savings by adopting these practices across all our software development – that's around US$60mn annually.” With this in mind, Nationwide’s decision to scale these methods enterprise-wide was an easy one to make. Today, the firm has around 200 software development lines, almost all of which have adopted this blend of Agile and Lean. Zeroing in on quality, productivity and time to market, Nationwide has also streamlined its benchmark metrics, and today it can trace around US$60mn of savings on an annual basis. In its most recent benchmark in 2017, for instance, Nationwide reported 7.8% better unit costs – that’s a 15.6% increase compared to its benchmark from three years earlier.

Not wanting to rest on its laurels, Nationwide decided to push its transformation further by tapping into DevOps. Emphasizing a shift in mindset, better collaboration and tighter integration between software development and IT operations, DevOps hopes to help build, test and release software faster and more reliably. “It builds on top of Lean and Agile, but it combines a significant amount of automation and brings development and infrastructure teams together,” says Vasudeva. “It requires a completely new way of thinking. We conducted a book study on Gene Kim’s DevOps Handbook so that we can really understand this methodology.” Today, the Fortune 100 company is on track to get top quartile productivity across all 200 of its productivity lines. By automating and enhancing the software development pipeline, Vasudeva adds that this proves that DevOps is “raising Nationwide’s game to a whole new level”.

Yet, this journey is far from over. Keen to impart a culture of continuous learning, Nationwide founded “Teaching Thursdays” whereby the firm sets aside two hours twice per month to allow employees to teach topics in classrooms to their peers. “It’s teaching by peers for peers,” Vasudeva explains. “It’s a grassroots project: We encourage people to attend and encourage people to teach. Some of the topics include how to do test automation, how to use the newest version of Angular J or sometimes it might include a topic like yoga or meditation. We have found this to be an incredible approach.” It seems the workforce agrees. On a cumulative basis more than 10,000 people participated in Teaching Thursdays last year. It’s also helped to promote best practices and allowed natural leaders to shine through. “It’s been an incredible low-cost approach, critical in making all of this journey possible,” Vasudeva adds. In conjunction with this, Nationwide has developed TechCon, its very own conference and a series of code camps. “Around 2,000 of our associates attend TechCon, during which more than 200 classes are taught. It's our own technology conference for our own technology people,” he says. “We also have code camps, whereby we pick topics that we want to excel in like machine learning, for instance, and invite a couple of people to study that topic and to teach other members of the team. It’s helped us create a clearly defined roadmap of how our employees can go from a novice to an expert in a topic. It’s helping to create a path to craftsmanship.”

Nationwide has earned its stripes as a leading employer – it has gained recognition as one of the Best Companies to Work For by Fortune 100. Vasudeva is keen to point out that the talents of his team have been crucial in making this software development strategy a reality. “It could not have been possible without the partnership of my peers in IT leadership,” he says. So far, Nationwide’s software-development strategy has been a roaring success. “We can prove that we are delivering faster software at a higher quality for reduced costs,” highlights Vasudeva. “This has allowed us to transform our IT function. We’ve also replaced legacy systems with modern packages, and we can provide better mobile capabilities for our consumers and agents. It has really allowed us to enable our business goals. Our customers have also benefited from this transformation by receiving better quality software faster and for a lower cost.”

Nationwide has made significant strides to enhance its software development process, but the transformation is far from over. “We still have a long way to go,” notes Vasudeva. “We aren't finished with DevOps just yet as we plan to extend DevOps practices across all 200 Nationwide software development lines. We are also experimenting with taking and applying Agile into the wider business. Then, last but not least, we’re focusing on Test Engineering and Automation (TEA). We are really making a big push to significantly automate the way we test our software.” Software engineering is undoubtedly in the throes of its own digital transformation. For businesses today, the stakes of getting this right are high, but it seems Nationwide has concocted the perfect recipe for software development transformation. 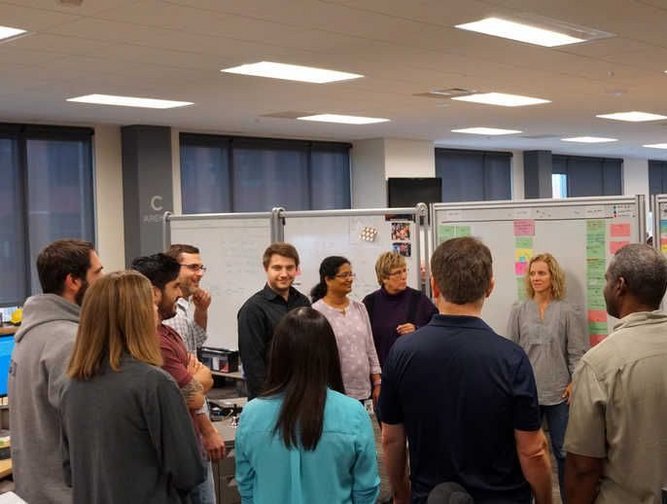 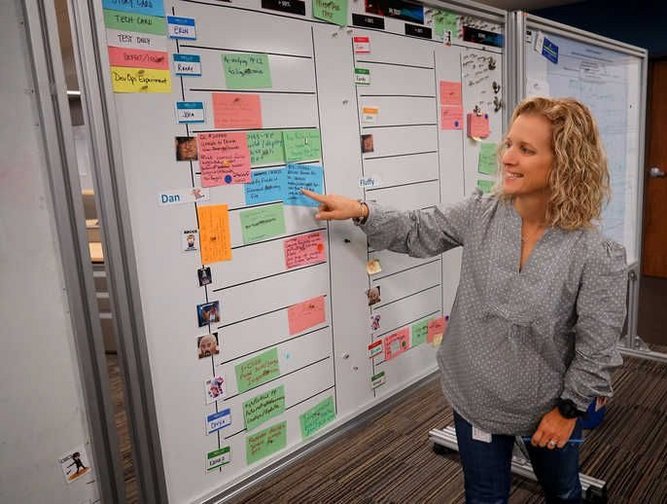 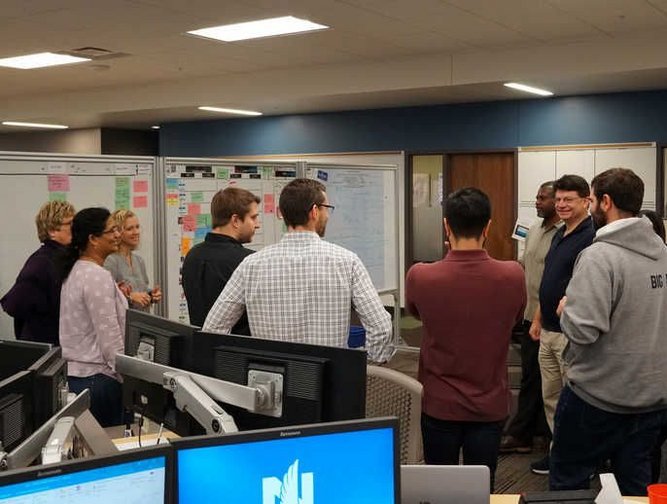