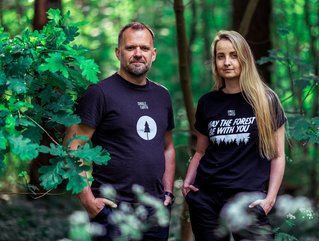 The company was founded by Andrus Aaslaid (left) and Merit Valdsalu.
Fintech startup Single.Earth has launched a new digital currency that rewards landowners for protecting their forests instead of chopping them down.

Estonian fintech startup Single.Earth has launched what it calls “the first currency backed by nature”, as it officially opens its platform to all landowners for the first time.

It is introducing a new digital currency called Merit, which Single.Earth issues to landowners. In the first phase of its launch, forest owners whose forests have been intact for 20 years will start receiving Merits for every 100kg of CO2 sequestered in their forests. Single.Earth says that indicators of biodiversity and carbon stocks will be incorporated into future iterations of the token.

The company hopes its new tools will make it just as profitable for landowners to preserve their forests as it would be to chop them down. The first forest owners who have pre-registered and passed the necessary onboarding procedures with Single.Earth, including KYC and AML checks, will start receiving the first Merits into their wallets from today.

Rewarding the stewards of our natural resources

Merit Valdsalu, CEO and Co-founder of Single.Earth, says: “Some 2,600 years after the first coins were minted, we are today minting a currency based on the work of nature. It’s a huge leap for the world of money.

“The current system in most countries leaves nature in the role of a beggar on the street, looking for pennies from passers-by – but nature is a decisive part of our existence. The only way forward is to bring nature’s ecosystem services into the economy on an equal footing with all other services.

“We are working towards a solution whereby interested persons will be able to buy Merits directly from landowners to reward those who keep their forests and other natural resources intact.”

The Tallinn-based startup is hoping to promote “a fully sustainable economy”, balancing consumption against the capabilities of the natural world.

“We have tested the platform for a few months to make sure we can manage the high volume of pre-registrations and we have already 1mn hectares of land on the platform, making it the fastest-growing portfolio in our nascent sector,” Valdsalu says.

Single.Earth’s team of developers and data scientists built a "digital twin" of the planet to describe how nature works in close to real-time. The first version of the digital twin covers the world’s forests and their CO2 sequestration.

Valdsalu continues: “We’re already working on adding other land types, such as wetlands and grasslands, and other ecosystem services, like biodiversity, to the platform. Our goal is to use the entire planet’s natural resources to create a new financial system based on nature.”

An Estonian solution to a global problem

Single.Earth was founded in 2019 by CTO Andrus Aaslaid, who has a background in engineering, and CEO Merit Valdsalu, who previously founded a startup to improve the maritime employment market. The company is backed by the likes of EQT Ventures, Icebreaker.VC and the founders of CRM platform Pipedrive.

The founders’ nationality is, perhaps, no coincidence. According to the UN, more than half (52%) of Estonia is forested with almost 1mn hectares classed as primary forest, the most biodiverse and carbon-dense form of forest. The natural environment is an important asset for Estonians. Now they have a digital asset to go with it.

Inspired by the rising popularity of cryptocurrencies, the startup is the latest to recognise the potential that digital assets have on positively impacting the world around us. In April, financial services platform Finastra teamed up with Danish company EcoTree to offer customers the opportunity to remove the carbon footprint associated with their activity on the app.

Businesses across the financial services landscape have started to recognise the potential in offering customers the ability to mitigate against their own carbon footprint, but Single.Earth says it is the first startup to launch a digital currency that consumers can trade which is directly linked to the preservation of forests and woodland habits.